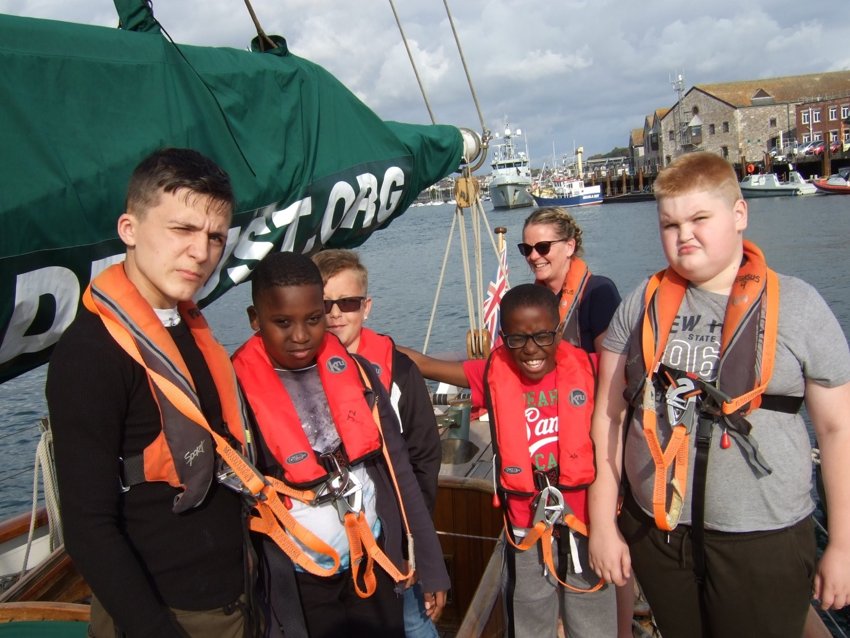 There were no tears, only supressed smiles from parents and carers at the thought of a week apart from the students.

Caleb experienced mixed feelings as we left the school for the first part of the journey to Plymouth but soon settled in to the minibus and little was heard from most of the students for the entire journey.  Dwain obviously has a very small bladder as he seemed to want to go to the toilet every 15 minutes.

We met up with our Skipper, Hannah, at the car park in Plymouth Yacht haven who quickly introduced us to her first mate, Emma ‘Titch’.  They helped us to load some carts with all our belongings and took us to the Pegasus.  This was the first time four of the crew saw our berths for the next week.  Riley was pleasantly surprised as the boat exceeded his expectations.

After sorting out our bunks we were given a safety brief and shown how to put on our life jackets. We were told how and when to attached ourselves to the Jack Stay (safety line) There are five times we need to connect ourselves to the jack stay: one, if you feel seas sick, two, rough seas, three, if its dark, four, if told to and five, if you want to.

Then we set sail and left the safety of the haven. We motored up the Tamar and found a sheltered anchorage past the naval docks.

A dinner of spaghetti bolognaise was eaten and we settled into our bunks. McKenzie managed to get four hours of sleep and woke up to the tunes of Moana.

Dwain woke after a pretty good night in his bunk on Pegasus.  After we got dressed and had breakfast we cleaned the heads (the nautical term for bathrooms) and had a briefing about what the day entailed.

Due to a mechanical failure of the anchor motor we headed back to Plymouth Yacht Haven to get it replaced.  This was the first time we had the sail up which Dwain remembered as the Stay Sail. This helped us to steer and maintain some speed.

At the Yacht Haven we went for a walk to a café and had hot chocolate and J2O’s we managed to get there in the sun but the walk back was rather wet as it had started to rain.

After a lunch of Sandwiches and soup we set sail again for Corsands Bay, this was about five miles away so we had the opportunity to hoist all three sails; Jib Sail, Stay Sail and Main Sail.

A relaxing sail over and dropping the anchor meant we could start to prepare dinner which was chicken fajitas, Riley thought “it was alright” which is high praise from him.

A relatively early night was needed as we were to wake at 7.00 the following day for our long sail to Fowey.

Today we were woken by Disney music at 7.00.  This was due to a long passage to Fowey with the wind direction being unfavourable which meant that we would have to tack a few times before being able to get into the harbour.

The sun was shining and the breeze light so we were able to get all three sails up but this time the reef was taken out of the mainsail so we had just about all the canvas up.

Once the sails were set the students found places to get comfortable and settled down for the day.  The baked potatoes were put in the oven and monitored by MacKenzie who managed to do this whilst having a nap on his bunk…who said males cannot multi task? The potatoes were ready and served about 10 minutes before we had to start tack so they were wolfed down with tuna, cheese, bolognaise or beans.

Tacking completed we headed into Fowey to moor at a buoy.  From here we took the tender to the town and walked to the beach via an ice cream shop.  Everyone took shoes and socks off and paddled in the sea, skimmed stones and collected shells and stones. After a struggle to get socks and shoes on without getting them sandy or wet we started the walk back.

The tender was waiting for us and took us back to Pegasus where we started getting dinner ready.  Riley enjoyed the paneer curry, so much he even asked for seconds! For everyone who knows Riley they will know that this is amazing.

The students were tired after a day in the sun, sailing and were on their bunks quiet by 9.00pm.

This was destined to be a short day as we were heading to Mevagissey, our morning music started at 7:30am and we were tucking into breakfast by 8:00am.

As we needed to charge the batteries we had sail and motor running and headed towards a new town.  The sea was the roughest it has been this time round with some of the waves crashing over the bow of the boat.  This led to a couple of the students suffering slightly with sea sickness but being on the open deck facing the bracing wind helped no end.

We anchored and had noodles for lunch.  This was a step too far for Riley who reverted back to his Pot Noodle. Taking the tender across the water to the harbour was slightly more damp than intended for some but with feet on dry land and the lure of another ice cream shop spirits were soon raised again.

Souvenir shopping completed, the dreaded tender ride back again got recently dry people wet again.  Mr Albutt probably got the brunt of the splashes this time round and was very relieved when he clambered back onboard the Pegasus.

Sausages and mash were prepared while the staff teased the students with riddles and played cards. Lee had to retire from the card game after trying to catch a falling card and hitting himself. He said the boat was moving but no-one else felt a thing!